ACIF Forecasts Market Dragged Down by Residential Construction but Not Out

Residential Building work fell 0.4% last year (2018-19). A much deeper contraction of 8.4% is expected this year (2019-20), dragging the value of work done down to $96 billion. The rebound in building activity is expected to be delayed until 2021-22. The drop in activity will be difficult to avoid despite recent improvements in house prices because it will take time to restore approval numbers, secure land and commence new projects and address other ‘lags’. 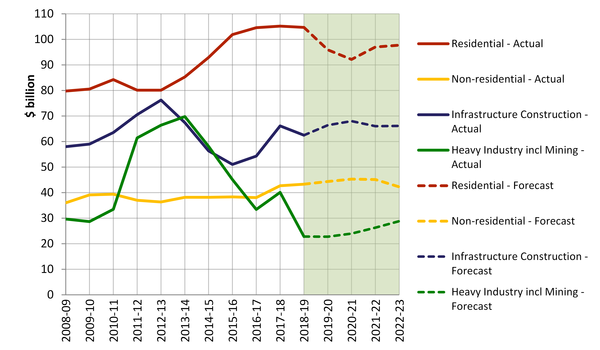 In marked contrast to Residential Building, Non-Residential Building activity is midway through a growth phase. Expanded business investment in Accommodation, Industrial and Offices, and Public sector investment, especially in Education and Defence. Growth is expected to continue through the remainder of this year and into 2020-21. This will raise activity to peak at $45 billion.

Australia’s pipeline of approved construction projects continues to grow, but a lower proportion of projects are moving to the construction stage

The value of new projects added to the construction pipeline hit a historic high of $35 billion in February 2019 before dropping to just $9.5 billion in March, which is approximately 75% of the five-year median value of new projects and considered very low. All sectors recorded lower numbers except mining which recorded a 58% increase at the national level, largely driven by applications lodged for WA and NT.

Projects transitioning from ‘approved’ into the construction phase have been subdued since September 2018 with results showing projects entering the build stage currently sitting at approximately 50% of the five-year median in terms of both number and value. While the number of projects moving into the build stage slipped by 17% in March, the value of projects rose by 23%. Of the 506 projects recorded as moving into construction, all sectors fell except apartment and unit construction which recorded an increase due to activity in this sector in Victoria.

Large projects are likely facing challenges obtaining finance, especially in the residential multi-unit sector, while also there may be some uncertainty related to the potential for a change in the federal government and global uncertainty that could be acting as a barrier to large financial commitments.

While activity across the major projects sector eases, the cost of building residential housing has continued to trend higher, albeit not quite as rapidly as previous years. 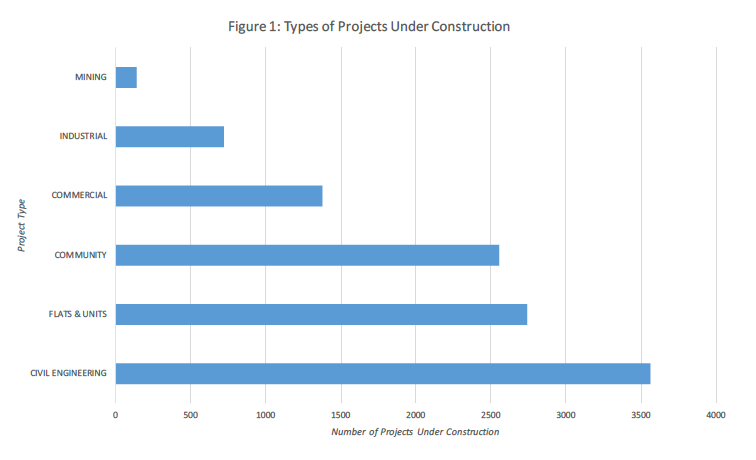 Background to the ACIF Forecasts

ACIF Forecasts are a primary source of market information for the building and construction industry in Australia.

Since 2002, Australian Construction Industry Forum (ACIF) has published the ACIF Forecasts to provide the industry with a relevant and credible ‘compass’ for the next ten years on upcoming demand for work across all sectors, including major projects, as well as what is happening with construction costs and labour requirements.

ACIF’s forecasts are released biannually, representing good value in keeping you up to date on the big picture trends, as well as a searchable database – the ACIF Customised Forecasts Dashboard.

About the Customised Forecasts Dashboard

The Customised Forecasts Dashboard makes it easy for businesses large and small to use our Forecasts database to get accurate local or national data – and plan effectively.

Four Forecasting tools in an easy to use online Dashboard.