The 2009 Building Design Awards were announced at the BDAV’s Annual Dinner, on Friday, 31 July 2009, and another impressive field of entries vied for the various Awards.

Chair of the judging panel, Paula Hanley, said “What struck me as a member of the judging panel was that the BDAV Awards entries for 2009 were so varied. This is testament to the vast range of work that building designers undertake. The entries ranged from quite large scale commercial and industrial projects to the relatively tiny projects entered into the new category for Minor Works. In between, we saw some breathtaking new houses, vernacular suburban houses transformed into resort-like residences, and economical but ingenious domestic alterations. We also saw extensive restaurant, office and retail fitouts. Overall the entries showed skill, innovation and attention to detail. They provide tangible evidence of the dedication of building designers to their work.”

The Judges unanimously agreed that the Cremorne Street Tenancy Fitout was worthy of the BDAV Building Design of the Year Award for 2009. This is another fine example of the scope and variety of skills held by Building Designers.

Interior fitouts require clever planning, design and documentation, considered co-ordination and design of services and contractors. They also meet a client brief that not only has functional requirements, but budgets and timeframes, and all this while satisfying building managements and guidelines.

To be able to meet the work flow and end user briefs and still be able to “have fun” has been well achieved in this fitout.

The project was an extension to a fitout that Dig Design had done a few years ago. The space needed a relationship with the adjacent fitout, but was to have greater flexibility whilst being casual and fun. In pragmatic terms, the space needed to accommodate offices, meeting rooms, hot desks and a corporate hospitality area, but the client’s brief was, always, that he wanted to be surprised and amazed by what was created.

The Judges described the design as “seamlessly combining folly with serious architecture” in all areas, including detailing and finishing. “This is particularly apparent in the trees and garden seat in the staff room,” said the Judges. “Public spaces have been interwoven within private work spaces, yet an openness has been achieved with the considered glazing partitions.”

“Various floor levels have been created adding points of interest, and the long corridors and repetitious design elements add movement and depth to the standard office floor plate. The traditional plaster ceilings have been designed around function and to suit tasks performed below. The variations to the lighting give pockets of focus and not an overall blanket of unimaginative illumination.”

The strong and bold palette of black, white, green and yellow give the impression of a “cartoonish” aesthetic that would certainly add colour to the user groups and clients alike.

The project was also a worthy winner of Interior Design: Non-Residential. 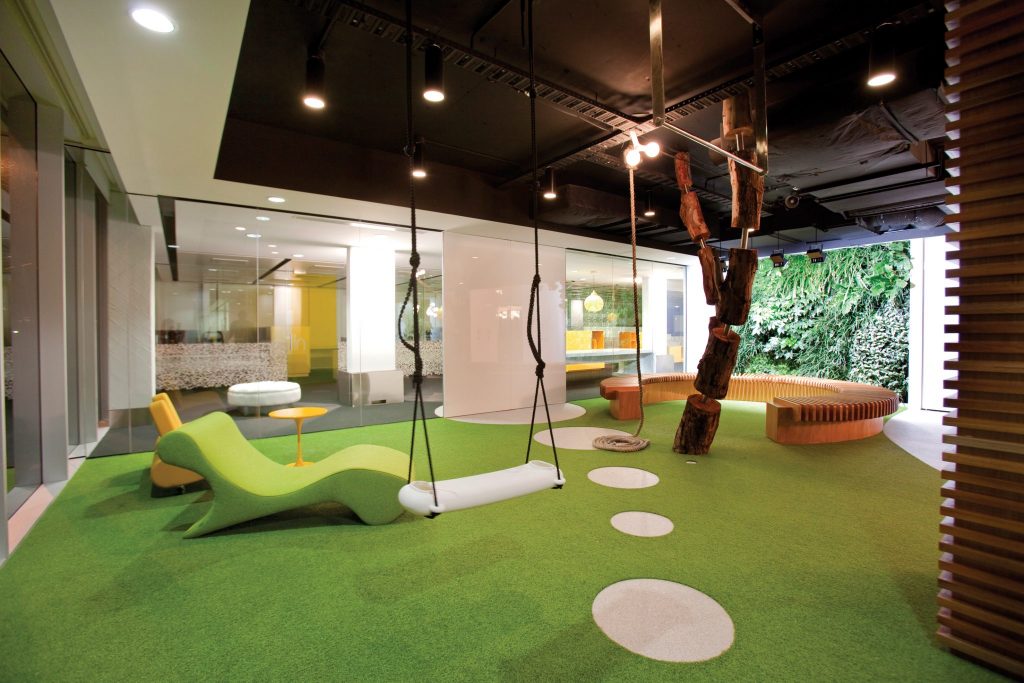 The staff room is a bright fun space.... a contemporary take on a suburban backyard creating a relaxing area for staff to wind down. It includes a living plant wall, astro turf with putting holes, swings and suspended trees - Images: Mosaic Photographika
To view all the winners of the BDAV's 2009 Building Design Awards, CLICK HERE