In early May this year a small and excited group of building designers, architects, engineers, landscape architects amongst a few from other industries went on a South American study tour organised by the BDAV in conjunction with Impact Events.

The two-week tour began in Buenos Aires, Argentina, and extended through to Brazil where we covered São Paulo, Brasilia and finally ending in Rio de Janeiro.

Both Diahann (wife) and I have been attending the study tours since they began in 2015, the first one being China, followed by Spain in 2016, Japan in 2017, and Scandinavia last year. Each of the tours have had plenty to offer culturally and architecturally where there was a great deal to be learnt about the way others live and build in comparison to what we know.

Travelling in an organised tour so far has proven to be my preferred way to travel for many reasons. It was great to be in the company of like-minded people who were collectively taking an interest in the architecture and design of each city. We constantly shared and exchanged opinions, thoughts and photos which would create a reflective dialogue over an enjoyable lunch or dinner.

The tango show in Buenos Aires was one of our most memorable nights – we didn’t expect to be picked up from the hotel in 1920’s vintage cars that took us back in time to where Carlos Gardel used to sing at the Esquina Carlos Gardel for a gala dinner and tango show. Earlier that day we had visited La Boca district where we saw the typical immigrants’ houses painted in a patchwork of bright bold colours for which it’s known for. La Boca was the district where the Tango was born.

After exploring the 20th century modern architecture of Buenos Aires, from Puerto Madero through to Palermo, we had a full day of leisure which gave us the opportunity to slow down and tour the city at a relaxed pace. We were also able to catch up on some souvenir shopping and visit a couple of Contemporary Art Museums which weren’t included on the itinerary. It is important that these free days occur throughout the tour so that we have time for exploring individual areas of interest. Site seeing options and recommendations were always offered to us on those days and this was of value to us as well.

Iguazu Falls was one of the tour’s nature highlights. We were able to view the falls from both the Argentina side and the Brazil side. Our accommodation, The Belmond Hotel had the most spectacular view of the falls. It was also one of the most beautiful hotels we stayed at which made our welcome into Brazil very inviting and exciting. One of our most memorable meals was when we expectantly met an incredible Peruvian chef who happened to be the guest chef at the hotel’s restaurant that night.

From Iguazu Falls we then headed to São Paulo where we visited the work of Lina Bo Bardi, Oscar Niemeyer and Marcelo Ferraz. We also discovered how the biggest city in Latin America started and developed into the richest city in South America.

Just over halfway through our tour we arrived in Brasilia where we visited the many landmark buildings of Oscar Niemeyer, the superblock south 308, and the incredibly impressive landscape by Roberto Burle Marx. Brasilia’s planning was somewhat reminiscent of our Canberra city. Opened as recent as 1960, Brasilia still today appears to be a progressive city where much is to be learnt. Satellite cities which surround the centre of Brasilia can be viewed from the top floor of the transmission centre of radio and tv.

Our final destination, Rio de Janeiro was a great place to end the tour, however it rained the whole time we were there. We did however push through the wet weather and armed with umbrellas we were able to see most of what was scheduled. Apart from covering all the scenery and tourist sites such as Sugar Loaf

Mountain and Christ the Redeemer, we booked an additional tour during our last leisure day to view two of the favelas (highly populated slums). These were eye openers and we suggest that they are included in the next tour that goes to Brazil! On the whole the entire tour did meet our expectations and we look forward to the next one.

Catch you again 2020 tour where ever you take us.

Thank you to the wonderful team at Impact Events for designing and running another successful BDAV Study Tour. These study tours are an exciting way for architects, building designers and other related industry professionals to obtain CPD points while discovering and exploring new destinations. Each tour has its own unique focus combining the works of famous local architects and building designers and local history.
BDAV 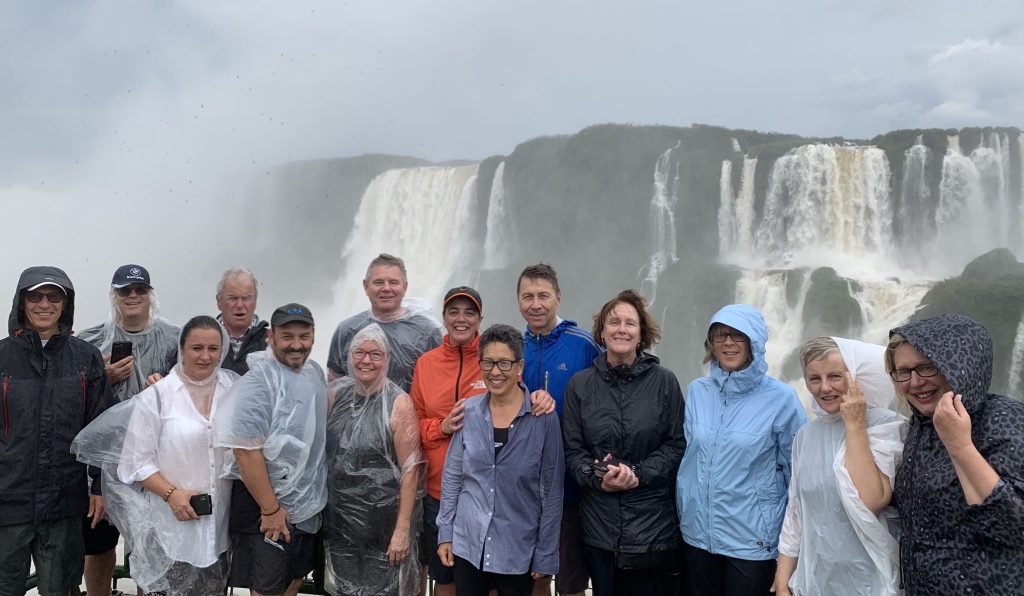