A house at Callignee in West Gippsland, owned by builder Chris Clarke which was destroyed one week after completion then redesigned by Hamilton Design from a burnt-out shell has achieved a record of nine awards in the Building Designers Association of Victoria’s 2011 Building Design Awards, including the coveted Building Design of the Year.

This highly personalised house – called Callignee II – Regeneration – was rebuilt after being almost razed to the ground during Victoria’s tragic Black Saturday bushfires in 2009. Survival of significant elements of the house along with a limited insurance payout drove rebuilding rather than wholesale demolition, slotting this entry into the Awards category of Alterations and Additions $200,000-$500,000. The design has used surviving elements to pay homage to the original house and the owner’s attachment to it, enabling it to re-emerge in exquisite form. As such, the house is testament to the courage of the survivors of a terrible bushfire season.

The house is a lyrical but robust interpretation of contemporary design, which is not only completely at ease in its setting, but actually contributes to its natural beauty. While completely unpolished in its use of materials, such as the surviving structural steel elements, burned concrete and rusted Corten steel internal and external linings, the house has an elegant arrangement of bold forms which appear to float above butt-jointed glass walls, providing a compelling contrast of textures.

The plan has open living areas, where the fire damaged concrete slab and kitchen island bench are evidence of the intensity of the bushfire. However, rather than providing a gloomy reminder of tragedy, the re-use of these elements lends a sense of triumph to the design. Similarly, fire-blackened steel is retained to frame large areas of glazing which looks out on to the surrounding bushland.

The main entry is at the upper level, which is reached by a suspended bridge of timber planking. A floating timber stair leads past a suspended bedroom which is open to the double height void, down to the living areas below. An internal bridge runs past an existing brickwork spine wall and a rooftop garden to a roof deck on the north-west side. Finishes throughout verge on an agricultural or industrial aesthetic: suspended floors comprise thick timber planks of seemingly random lengths interspersed with steel grating; roughhewn timber forms a back-drop to the bed in the main bedroom, and bathroom vanities are fabricated out of stacked and bolted recycled wharf timbers, with roughhewn stone basins.

Strategically placed walls and floors of glass allow views to poetic and spiritually nourishing features such as a turtle pond and a Tai Chi and yoga lawn. Timber planking acts as a shower platform while covering a sunken Japanese-style bath in the ensuite. A glass walled swimming pool provides underwater views from the living areas, and encourages cooling breezes to enter through louvred windows.

This house is an intensely personal abode which, through the designer’s skill, has resisted falling into the realm of quirkiness. The result is a building of rare beauty and serenity, and one that has reached beyond some strong competition to be awarded the highest honour for the BDAV 2011 Awards.

The project also won awards for 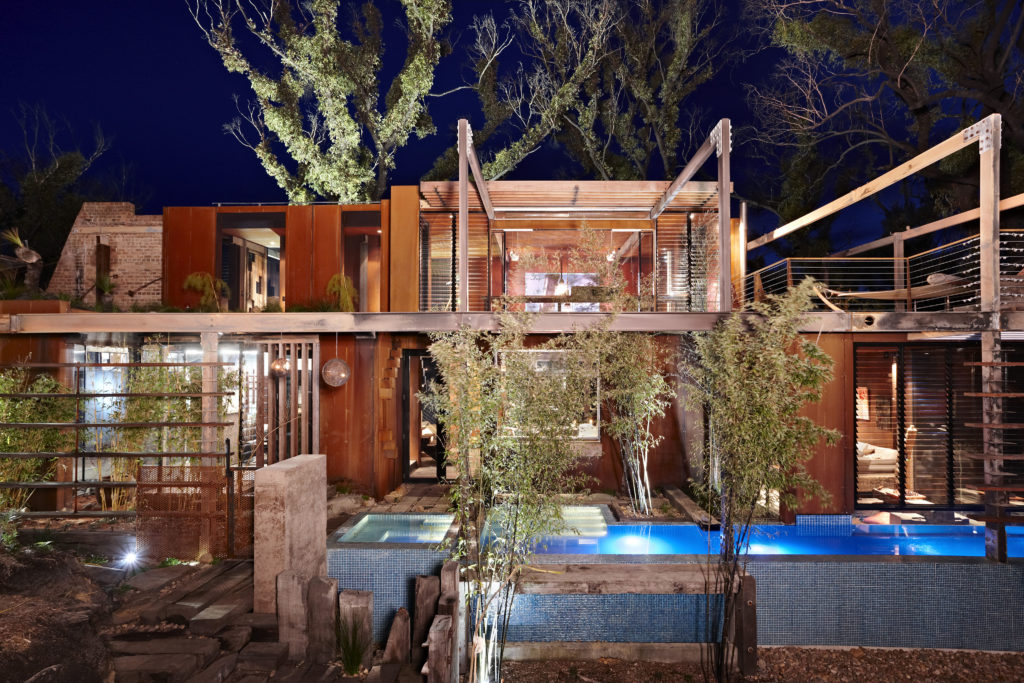 A home with a sense of place amid the bush regeneration - Images: Alicia Taylor & Lifestyle Channel