BDAV Past President, Sean Hamilton, who manages Hamilton Design Pty Ltd and Berwick Drafting, will have one of his projects featured on Grand Designs Australia, the Australian version of the highly popular UK series. The project, for their client, Chris Clarke of Callignee, is a property that was destroyed in the Black Saturday fires in February 2009. The project deliberately does not entirely disguise the devastation of the fires.

Sean sent the following to us:

“Attached are a few photos of Callignee, Black Saturday, as it was, and after the devastation, and what we’re rebuilding.”

“Our client, Chris Clarke – who is also the builder – had only just moved into his ‘life’s dream’ when the fires raged through Gippsland. In the last 15 minutes, he faced the choice of either staying to save his new home or racing back down to Hazelwood to save his mother’s home. There really was no choice, obviously.”

“Like so many victims since Black Saturday, Chris was devastated, and really did not know what to do or where to begin, or if, in fact, there was a beginning. Chris buried himself in other work and projects but, as time went by, the ‘authorities’ put increasing pressure on him to make way for the demolition contractors. After an appropriate time, I sat down with Chris and, together, we studied the extent of damage objectively. I believed that we could rebuild it, and encouraged Chris to begin thinking about the possibilities, despite all the contrary advice and pressure. Chris just needed that ‘left of field’ prod and, since then, we’ve been going non-stop at it. This is where Grand Designs Australia got wind of the idea and also ran with it, also encouraging Chris at every step. We visit the site and, as the weeks roll on, we see the progress, and are convinced we made the right decisions.”

“The design does not attempt to entirely disguise its re-emergence from the ashes. Bent and rusted steel beams and columns have been retained as part of its new character and identity with its environment, and the journey. The floor plan layout has been scaled back from its original design to incorporate roof top bush gardens, and elevations have been adapted to the battle scars. Windows that were salvageable have been retained or shifted elsewhere. Brick and masonry walls that weren’t blown out have also been retained. All external timber cladding on the previous design is to be replaced with core10 rusted sheet steel cladding. The existing floor slab surface which is blown out from the heat – including all the in-slab hydroponic heating pipes – will have a new topping and new heating pipes.”

“The original home had a lot of energy in it, and a special connection to its owner and creator, Chris. Even in its burnt and twisted skeleton, this residual energy is the motivator to re-build and re-emerge.”

The BDAV thanks Sean Hamilton for his contribution. 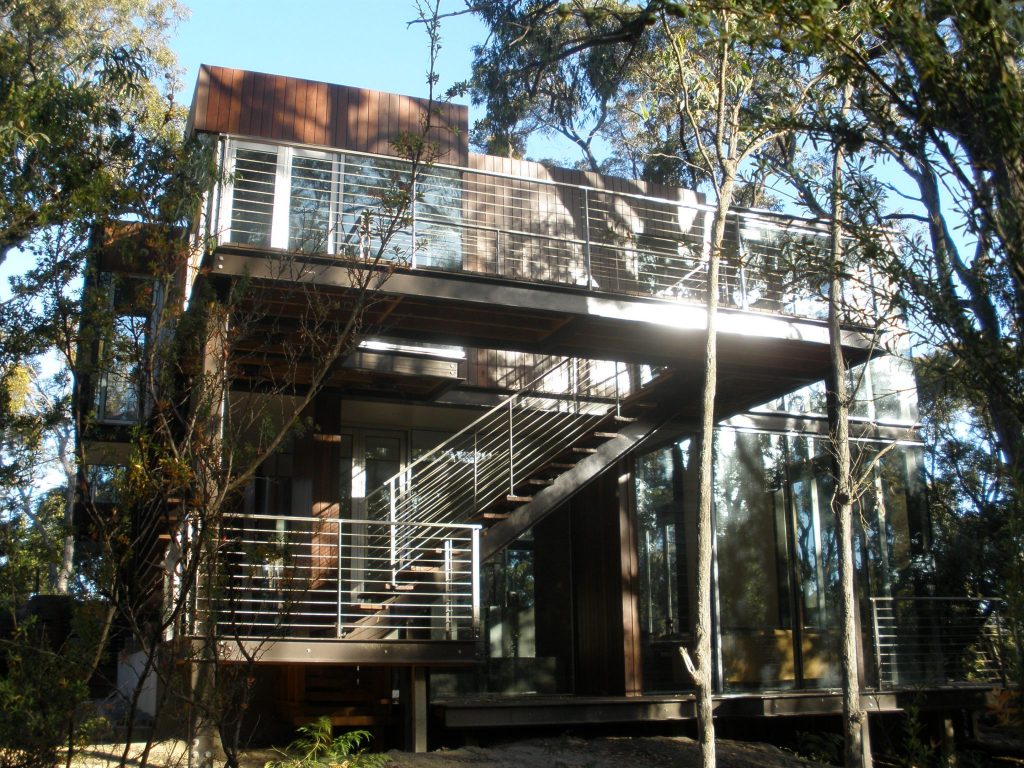 This project won a record nine BDAV awards in 2011, including the coveted Building Design of the Year. To view the award-winning project, CLICK HERE.