The BDAV China Tour 2015 was twelve days of pacy travel touring that I have not done for many years. We saw the highlights, ate exotic and not so exotic food, learnt some amazing facts and appreciated more fully the China perspective through its people and history.

My idea of China before coming was that it was going to be smoggy, congested and crowded. What we found in all the cities we visited – Guangzhou, Shanghai, Beijing and Xian – were very well-planned and organised cities of urban design that seem to effortlessly house, transport and employ the millions of people that they accommodated. Even in rush hour in Beijing, a city of 24 million, the traffic was better than that of Melbourne, with fewer bottle-necks due to the web of highways lapping over and under each other like a string of noodles.

The infrastructure, including highways, subways, bridges, and housing that has been built in the last 30 years, especially in the ‘newer’ cities of Shanghai and Guangzhou, was truly amazing. We were amazed at the technology of the train that ran through the outskirts of Shanghai. Hovering over the tracks at 430km p/hr with magnetic pull, wooshing us along, we gasped like children at the thumping sound of the passing train travelling in the opposite direction as it went by. We travelled 30km in seven minutes. The following day we travelled on a ‘normal’ train to Tianjin; this train only travelled at 300 km p/hr. We travelled a distance equivalent of Melbourne to Toowoomba, (QLD) in only five hours.

The built architecture was not just to provide leasable space but to provide harmony as a fengshui gateway in the sky, or a pond, a void to circulate the chi energy, all contributing to an exciting array of modern architecture. In Shanghai, areas of heritage value like the English Bund, or French Quarter, or the Muslim Quarter in Xian, sat comfortably within the modern metropoles. In the Olympic Village in Beijing we were able to marvel at the Birds Nest and Swimming Bubble.

I am most likely still naive at this point but I can only compare it to our congested eastern-board Australian cities, becoming immobile under inaction. It was clearly apparent that the advantages of a one party political system is that it enabled government to plan for the future with gusto in comparison to our system that is more dogged down in party politics and winning government. I couldn’t help imagining the possibilities for our regional cities and our cities’ future liveability if we had a very fast train running from Melbourne to Mildura, or Melbourne to Sydney.

There were many ironies however in China. The ability to trust was required by us travellers, as we were required to hand over our passports for periods of time, sometimes days. Our bags were continuously scanned at airports, museums and other official venues. Our tour guide entertained us with an acrostic that illustrated these ironies quite well such as: CHINA:

– Communists Hate Internet Not Allowed OR
– Come Here I Need your Affection.

As a modern Chinese, our tour guide, David, posed an interesting question: for the quantities of product exported at very little margin, like $10 profit on a Chinese produced iPhone, or $5 on a watch, for example, what was the cost to their environment? David reminded us that on our travels through China, we should remember that, despite having a lot of wealth, 100 million people still lived on less than $2.00 per day. Compared to our ‘diamond shape’ economy, China was very much a ‘pyramid’, with very few people holding the bulk of the country’s wealth. David’s more serious acrostic:

C – Communism, capitalism, corruption, condominiums
H – Housing, (70 year leases) Health/Aged
I – Incomes, Insurance
N – Nationality / that Sun Yat Sen united China
A – Acknowledge that the Chinese Government has managed to feed 22% of the world’s population form 7% of the arable land available, illustrates that there was much understanding to be had with the Chinese culture and more serious lessons be learned.

The Chinese experience is a must for any Australian in contemporary times. Thousands of years of history explain a culture of trade and enterprise, political upheaval and strong ethnic identities. What was also a stark difference to me was the apparent attitude to women. There were no cat callers, glares or scared women walking the streets. Women walked and spoke comfortably. China’s ‘Dragon Lady’ is not what we imagine. She is a woman of admirable strength; it is an endearing term.

In addition to our travel experiences, we networked with our own – as well as international – contacts and, importantly, made new friends. For such a large group, we all got along extremely well. I would highly recommend such a tour to any BDAV member thinking of travelling in the future.

The BDAV coordinated its first international Study Tour in 2015, and 39 participants – a mix of building designers and building surveyors – visited Guangzhou, Shanghai, Tianjin, Beijing and Xian from 10-24 May 2015. Our thanks to Mike Mettes and John Prendergast for their assistance with the group. Christina Zigouras, participated in the tour, and we appreciate her sharing her comments with us. 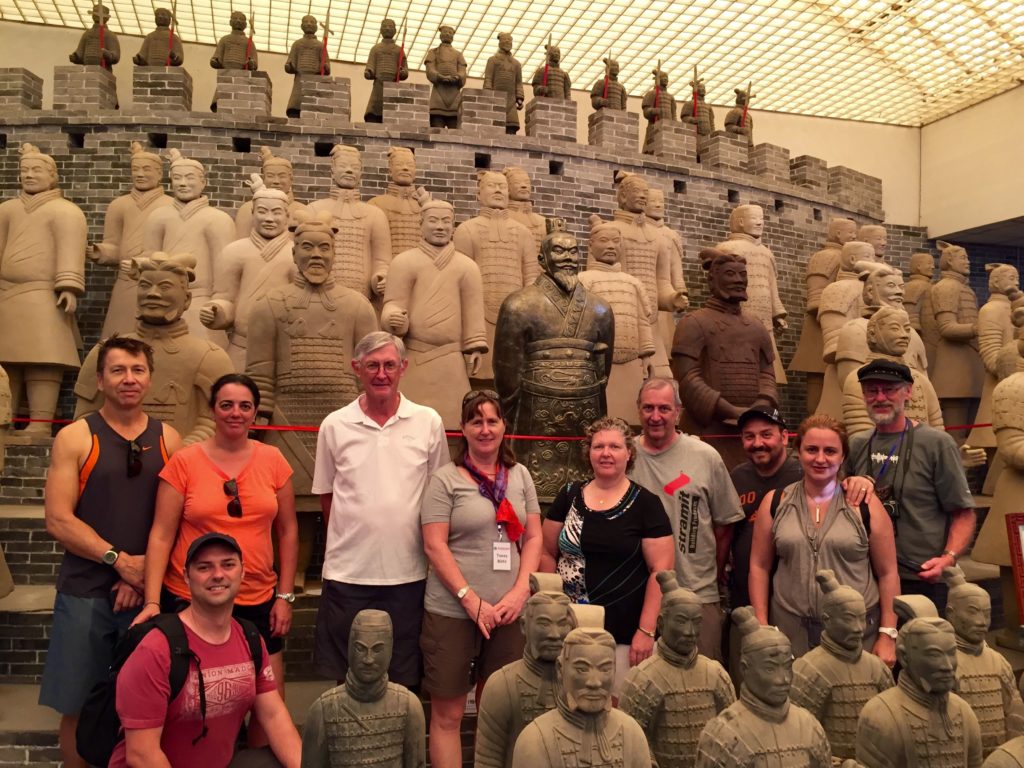 Some of the participants at the BDAV's 2015 China Study Tour - Images: Michael Mettes