Over the past few months there have been a number of Red Dot decisions relating to changes to planning provisions that occur prior to a VCAT hearing, which will be of interest to readers.

Red Dot decisions are decisions of the Victorian Civil and Adminis-trative Tribunal (VCAT) which are of note because of perceived interest or significance, or their unusual or controversial nature.

Aquadonis Pty Ltd v Kingston CC [2018] VCAT 1407 involved a planning permit application for a mixed use development which included three or more dwellings. The permit applicant had lodged an appeal under Section 79 of the Planning and Environment Act 1987, against Council’s failure to make a decision within the prescribed time. At the time of the hearing, a Cultural Heritage Management Plan had not been provided, and it was queried whether the Tribunal had the jurisdiction to hear the matter, given Council could not make a decision on the application until a CHMP had been provided.

This decision referred to an earlier VCAT decision Stanley Pastoral Pty Ltd v Indigo SC which found that because a CHMP had not been provided for the proposal (where it was required) the Council processing clock had not begun to run and therefore VCAT did not have the jurisdiction to consider the matter.

In Aquadonis Pty Ltd, circumstances were considered to be different from those in Stanley Pastoral Pty Ltd because at the time the permit application was lodged and when the appeal was lodged, the subject site was not within an area of cultural heritage significance and did not require a CHMP.

The takeaway message here is to check CHMP requirements prior to lodging an appeal, in case your subject site requires a CHMP where it may not have when you lodged the original planning permit application to Council.

2426 Grenville Pty Ltd v Bayside CC [2018] VCAT 1338 involved an application to develop an apartment building and a discussion relating to the mandatory garden area requirement. The proposal included a habitable floor level below the existing ground level, with bedrooms serviced by sunken or tiered courtyard gardens.

The Garden Area requirements are mandatory provisions for the Neighbourhood Residential Zone and General Residential Zone, introduced in March 2017, amended and clarified by definition in 2018. In Grenville Pty Ltd, Clause 32.08-4 in the scheme at the time of Council’s refusal included a requirement that “a lot must provide the minimum garden area at ground level” and Council did not consider that the tiered gardens and provision of courtyards within the lower ground level were provided “at ground level”.

The Tribunal found that the garden areas provided at lower ground level in the proposal did not come within any of the exclusions in the garden area definition and should therefore be included in an assessment of garden area.

O’Kane v Macedon Ranges SC [2018] VCAT 1562 involved an application to construct eight dwellings on a lot in a Neighbourhood Residential Zone. After lodging the planning permit
application, but prior to Council’s decision, the Planning Scheme was amended twice to:

The question of law was whether or not Clause 32.09-6 (transitional provisions under the GRZ which “kept” Clause 55 provisions for applications lodged prior to 13 April 2017) preserved the applicable Clause 55 standards under the General Residential Zone in force when the predecessor of that clause (ie Clause 32.08-6) commenced. The Tribunal found that it did not. Accordingly, the current standards in the schedule to the Neighbourhood Residential Zone applied. In particular the Tribunal found that:

These tid-bits are part of the regular contribution made by Clause:1 Planning to Intersect. For more information, contact Ashley Thompson on (03) 9370 9599 or visit Clause 1 at www.clause1.com.au 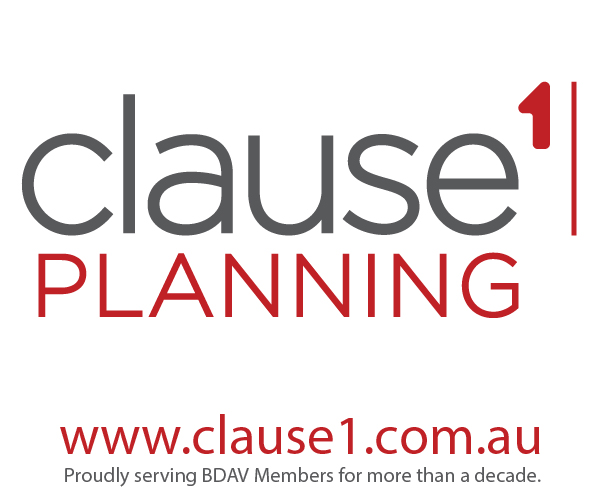